Back in May of LAST year, I participated in the Seattle Color Run, Shine Tour and since I had so much fun I really didn’t want to scrap writing about it just because it’s already *gasp* April, 2016. If you have never participated in The Color Run, I highly recommend it. I can see this fun run becoming a tradition simply because it’s just that — fun!

Here is a sneak peek for this year:

Prior to this experience I had only seen photos, videos, and heard rave reviews for these events. I’ve always wanted to participate but it just never worked out — until last year! Not only was I lucky enough to win an entry from my blogger friend, Courtney, but the timing worked out perfect because the Seattle event was about a month out and I had just enough time to help promote the event + squeeze in a giveaway (thanks Michelle!) for local readers.

Here’s what you need to know about the Happiest 5k… First things first — this is literally a “fun run” — it is not a timed event and while you can of course RUN, most people are actually walking, skipping, cartwheeling and just having a good time with family and friends! The point is to have fun out doors and make memories. 🙂

The 2015, Color Run in Seattle landed on Mother’s Day and since my Mama had to work I went with my friend Dawn + her two daughters. Here is a picture of us the day before the race picking up all of our race packets: 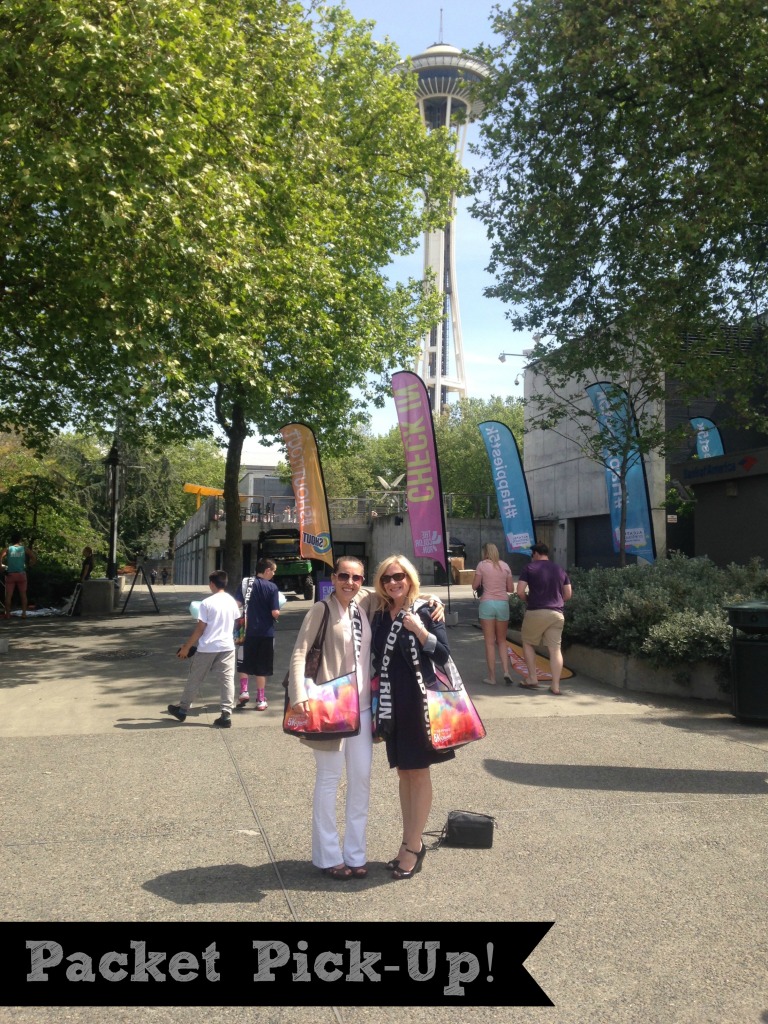 When we arrived it wasn’t crazy busy, which was pretty awesome. I couldn’t figure out if we had missed or beat the crowd because I was told it was a sold out event — but I was not complaining! Regardless, the staff/volunteers appeared super organized. We didn’t have to wait at all and I really liked how everything flowed. The race packet was a large colorful cross-body tote (pictured above) that included our race t-shirts, tricolor headbands, some fun tattoos and of course we would get our gold finisher’s medal after the race.

They had a pop-up shop set up adjacent to the packet pick-up, which was pure genius because of people like me who wait until the last minute to get all of the “fun-run gear”. You best believe we stocked up on the tutus, sunglasses, bandanas, arm bands… ALL OF IT.

The morning of we met at Starbucks and drove over in one car. We gave ourselves just enough time to find the best parking spot ever (near the start!) and tinkle one last time in a real bathroom (with no lines!) before the 8am start. Technically there were [supposed to be] two waves: one at 8am and a second at 8:15am… but I don’t really remember there being a defined difference?!

There were so many people, which made the start a slow shuffle but then opened up after the second zone (they alternate dry & wet zones and each zone is a different color). I remember being mesmerized by how many people there were. It always amazes me how well Seattle accommodates large crowds — if you didn’t know, this is just one of MANY huge events hosted by the Emerald City!! It was so much fun being downtown so early in the morning sans the rush hour traffic. I hadn’t realized how fun running downtown was until I found myself noticing things I usually don’t get a chance to see. 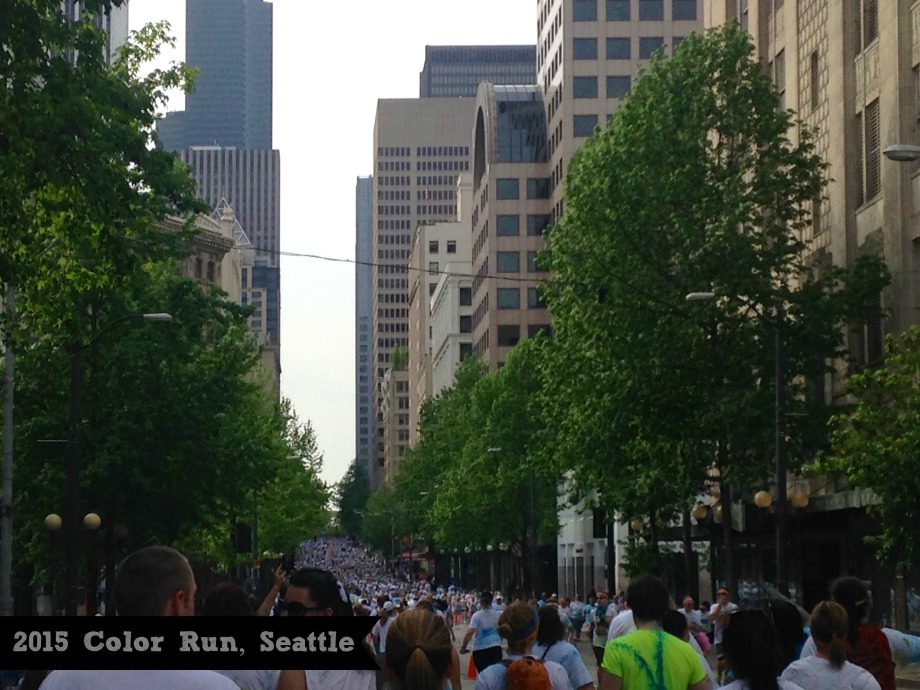 Look at the sea of people in this photo! It was definitely a SOLD OUT event!

The start was pretty slow, but we were convinced it was because we were in the second wave. As we progressed, we noticed the further away each zone was from the other really decreased the bottlenecking. As you crossed the finished line they handed out these beautiful, high-quality medals. I still have mine hanging in my office. It’s a great keepsake!

We had a BLAST post-run, hanging out in Seattle Center people-watching etc. There was entertainment everywhere, and we took tons of photos/videos — it was a perfect way to start our beautiful Sunday, Mother’s Day!

Overall, it was a great experience and not only do I recommend participating in The Color Run — but I’d love to do it again!! If you’re able to participate this year, you should! I’m really diggin’ the Tropicolor theme (I’m obsessed with pineapple’s — one of my company logos is a pineapple!) — and I’m for sure going to attempt rallying some troops for a “Part Two” because it’s THAT fun. 😉

You can visit The Color Run website HERE to get more details + register for an event near you. I can promise you this — you will have the most fun wherever you are because this team knows how to throw a party!

Have you participated in a Color Run Event?

Are you planning on a Color Run somewhere this year?

Jenn is a faith-based healthy living lifestyle blogger who bounces from Maui to Seattle as often as possible. As a health-conscious + raw // plant-based // fitness junkie -- sharing her adventures one post at a time -- she's most passionate about educating, sharing + inspiring others to make simple, healthier decisions everyday and feeling empowered with their health.